Cooking is like love. It should be entered into with abandon, or not at all – Harriet Van Horne

She may have found fame as a newspaper columnist, but Harriet Van Horne knew a thing or two about cooking as well.

It becomes a consuming hobby, it’s all that you’ll think about and all that you want to think about. And do you know what the greatest cooking secret of all is?

What the one aspect of it that has encouraged generation after generation of amateur cooks to follow its alluring rhythm from the cradle to the grave is and the hidden truth that no chef wants to tell any outsider about is?

It’s that cooking outside is far more addictive and pleasurable than cooking inside.

But if you’re going to devote your life to the craft of cooking outside, most commonly in the form of grilling, you’ll need the right grill to work with.

A good grill is the brush, palate, and canvas that you use to create your masterpieces, and while certain quarters of the grilling community insist that wood and charcoal are the best way to grill, we’ve always found that gas is more efficient, it also trumps its rivals in the flavor stakes.

That’s why we compiled a list of the best three burner gas grills so that you can travel down the same path to grilling perfection as we are, and experience the cornucopia of flavors that three burners will help you to achieve when grilling. Weber’s every thought is about grilling. Grilling is their modus operandi and their reason to exist, and for nearly seventy years they’ve devoted their every waking moment to developing the world of grilling bit by bit.

They’ve come a long way since nineteen fifty-two when they took an old marine buoy and with a little MacGyver style know-how, transformed it into the world’s first kettle barbecue.

What is GS4? We’re glad you asked.

It combines Weber’s Infinity Ignition which guarantees that your grill will fire up every single time, perfectly placed burners to ensure an even distribution of heat, flavorizer bars to imbue your cook with an irresistible smokey flavor, and a grease management system that prevents any and all potential flare-ups.

Combine all of that with three burners capable of providing thirty-nine thousand BTU’s (British Thermal Units) of heat to the five hundred and thirty square inches of the primary cooking area and an additional side burner which serves up twelve thousand BTU’s to the one hundred and thirteen squares inches of space that make up the secondary cooking area, and you’ve got one of the most powerful weapons in the grilling world at your disposal.

Some grills hang around your yard and just look pretty, while others, like Genesis II, can change your life.

Everything that you’ll ever need, or want, to know about grilling can be learned in front of this monstrously powerful and simple to master grill.

Weber set out to change the world of grilling forever, and with the Genesis II, they are well on the way to achieving ambition.

If you want to see the difference between Weber Spirit and Genesis grills, you can check out our resource on that topic right here. 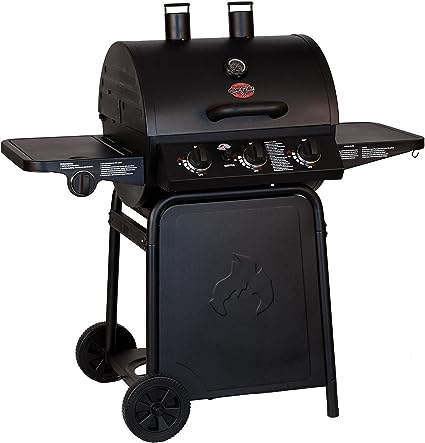 A family founded and owned business that wholeheartedly believes in making the sort of hard-working, durable, and affordable grills that the average American family needs and deserves, Char-Griller cuts out all the intermediary flim-flam and nonsense that no one needs to be bothered by and just concentrates on doing what they’ve always done.

Making great grills that you can depend on.

Their Grillin’ Pro is a serious, built to last propane-fired grill for serious grillers that’s been fashioned from heavy-gauge steel and finished off with powder coating to protect it from the elements.

And it’s as strong inside it’s grilling hood as it is on the outside, as its cast-iron grilling plates have been coated in porcelain to make them easier to clean and are able to transit every degree of the forty thousand BTU’s of heat that it’s three main burners supply to the flour hundred and thirty-eight square inches of primary cooking surface.

If that isn’t enough grilling power for you, the Pro’ also packs a side burner that can send another twelve thousand BTU’s of heat to it’s one hundred and sixty square inches of cooking space.

Char-Griller has made it their mission to bring grilling into every American home, and have designed their grills to give you more cooking power than you’ll ever need at a price that everyone can afford.

The Pro is the gas grilling knock-out punch that no-one ever saw coming. 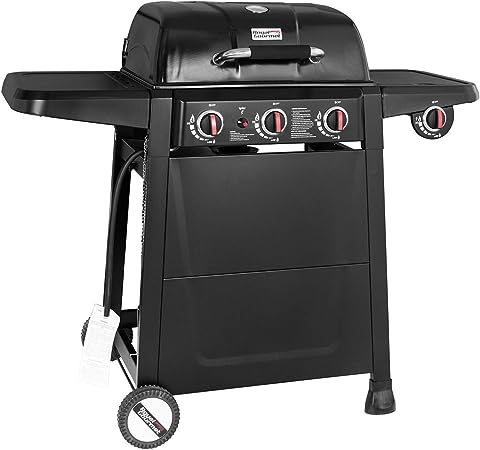 Driven by a passion for tradition, Royal Gourmet is committed to making innovative, affordable grills that can and will enhance the outdoor cooking experience of anyone fortunate enough to use them.

Based in Atlanta, they’re steeped in the Southern way of doing things and their brand sticks to it like glue by creating grills that put family, food, and friends first.

It’s Piezo ignition system is designed to bring all thirty-nine thousand BTU’s of heat that its three main burners produce to life at once so that they can grill and sear anything that you want them to on the four hundred and forty-three square inches of its primary cooking surface.

And the same ignition system guarantees that the lidded side burner can also bring it’s nine thousand BTU’s of heat online to cook whatever else you need to on it’s additional one hundred and twenty-three square inches of cooking space.

That’s a lot of cooking power for a relatively small grill that’s been made to fit into all of the tightest spaces and smallest areas in your yard.

They may not be the biggest name in grilling, but Royal Gourmet has created a devoted fanbase by delivering the sort of grills that thousands of amateur cooks rely on every single weekend of the year.

And given their ever-growing fanbase, it’s only a matter of time until Royal Gourmet rises up and claims its rightful place at the top of the grilling food chain. 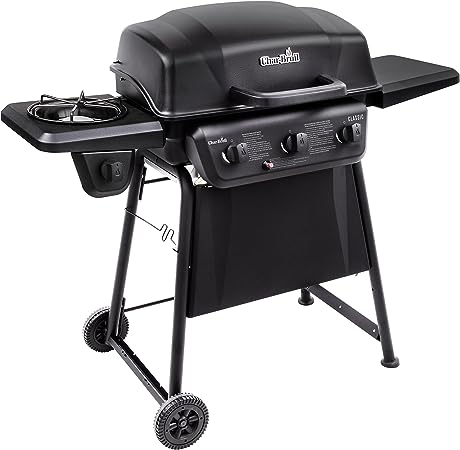 One of the heavyweights of the American grilling scene, Char-Broil are true pioneers, and in the seven decades since they brought one of the first charcoal grills to market they’ve been leading the charge in grilling innovation and technology.

With more patents under the collective grilling belt than any other brand, Char-Broil have earned their grilling reputation the only way they know. By making a grill for every griller, no matter what their cooking demands are.

A certified classic, the Char-Broil 360 has stood the test of time thanks to having become a long-established favorite within the grilling community.

Delivering thirty thousand BTU’s of heat from three separate burners to three hundred and sixty square inches of cooking surface, this easy to use grill is infinitely versatile and adaptable.

And with an additional side burner that generates another eight thousand BTU’s of heat, this grill has made its name the hard way, by cooking up a storm in the grilling community which has ensured its palace in the annals of the grilling hall of fame.

It may not be the prettiest three burner grill that you’ll ever see, but what it lacks in the looks department it more than makes up for with incredible functionality and grilling power.

After all, as our pop once told us, looks aren’t everything and they’ll only get you so far before you have to stand your ground and prove what you can do. 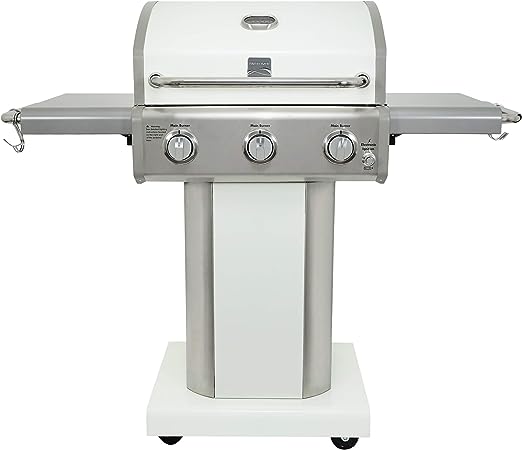 For more than one hundred years, Kenmore has lived and breathed appliances.

They’re a household name who have been responsible for shaping the kitchen, both inside and outside, based destiny of the average American family since your grandparents were children.

And they pride themselves on the fact that however you like to grill, they’ve got a model that’ll meet your every need and expectation.

With more than five hundred square inches of cooking space and three burners that serve up thirty thousand BTU’s of heat, this propane patio grill has been designed to make the art of outdoor cooking simple.

It’s easy to use, and even easier to master and can, and will change the way that you think about cooking for you and your family. Its one-touch electronic ignition means that your next meal is never more than a heartbeat away when you’re cooking the Kenmore way.

There’s a reason why Kenmore has been a fixture on the American cooking scene for more than one hundred years and that’s because everything they do is done with you in mind.

Which Three Burner Gas Grill Is Right For Me?

As three-burner gas grills are all designed to do roughly the same thing, the only things that separates one grill from another are the additional features and functionality they possess and their price.

And unfortunately, the latter dictates the former. If you want an all-singing and all-dancing grill, it’s going to cost a lot more than a basic three burner grill will.

The most important thing to remember when choosing your grill though is your budget, Set it, and remain firm and whatever you do, don’t exceed the limit that you’ve set for yourself as there’s a grill on our list that’ll fit your budget.

That said if your budget isn’t an issue, and you’re looking for us to point you in the right three burner direction, we’d have to admit that the best grill on our list is the monumentally expensive Weber which will do just about everything except sit up and beg.

But if your budget is limited, we’d recommend that you grill the Char way, and go with either the Broil or Griller three burners, as they’re more than capable of raising the grilling roof and helping you to become a certified grilling master.

What Is A 3-Burner Gas Grill?

A three-burner gas grill is an oven that has been purpose-designed to cook outdoors and is almost always best utilized on either a patio or decking or in a yard.

Using either propane or natural gas as its fuel source, these grills use three separate, individually controlled burners to deliver the heat that it makes to the grill’s cooking surface.