Good barbecue is more complicated than you think – Manish Dayal

Manish is right. The vast majority of people seem to think that barbecuing is easy and that grilling is something that happens in the background when you’re throwing a lavish yard party or hosting a cookout.

It’s a myth that’s been popularised by an endless succession of throwaway soda and candy adverts that use grilling as a background set piece to extol the virtues of minimal sugar content and diet versions of the drinks that fueled our childhoods.

We never bought into the idea that grilling was easy, we couldn’t as we’ve spent most of our lives immersed in the world of barbecue, so we know just how gloriously complicated and intricate and involving grilling can be.

The trick to showing the world how great the art of grilling and barbecuing can be is finding the right medium to utilize your expertise and accentuate your cooking skills.

That’s why we’re always searching for the perfect grill, the one that we can work in perfect symbiosis with so that we can inch ever closer to grilling nirvana and achieve our lifelong dream of finally finding the grill we’ve been searching for our entire lives.

Even though we were always led to believe that charcoal and wood were the only fuels a  good griller ever needed, as we’ve got older we’ve discovered that hidden in the world of gas and propane grills is a wealth of secret grilling knowledge and potential.

That’s why our search for the perfect grill brought us, figuratively speaking at least, to the door of Napoleon, a brand that is inextricably linked with both gas and propane.

We needed to find out if the whispers were true and whether propane was really the equal of, and in some cases better than, wood. And that’s why we spent a weekend grilling with Napoleon’s Rogue 425.

Napoleon Grills – Who Are They?

Before we embarked on our propane grilling adventure, the only Napoleons we knew anything about were the French Emperor and General and the Man From U.N.C.L.E.

As it turns out, they couldn’t hold a candle to Canada’s best-kept secret, and one of their best-managed companies, who also happened to be called Napoleon.

In fact, the only thing that they do have in common with the soldier and the spy is their name.

Founded in Barrie, Ontario, Napoleon are a leading manufacturer of gas and propane-fueled home equipment who have become market leaders thanks to their belief in, and adherence to, their guiding principles of creating comfort and luxury through a combination of stunning design and innovative technology.

They are, as it turns out, one of the grilling industry’s most beloved brands, and having spent some time with their Rogue grill, we wish that we’d paid a little more attention to what was going on North of the border, as Napoleon is slowly, but surely transforming the world of the propane-powered grill.

They might be more well known for their highly popular Prestige Pro series, but as soon as the mainstream grilling community discovers their more affordable Rouge series, we think many will become more familiar with this brand. 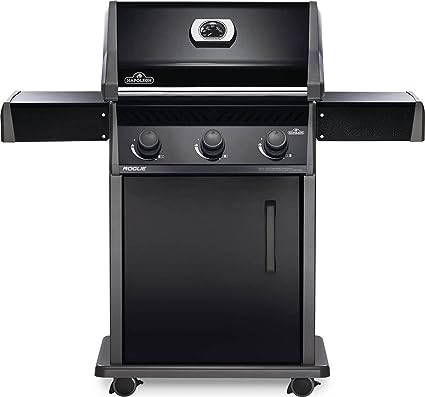 A lot of long time grillers will tell you that there’s a world of difference in the flavor that wood-fired barbecues and propane-fueled grills add to the cook.

And they’re right, as wood usually adds a smoky, deep, and sometimes rich taste to food, while propane keeps the cook clean and lets the natural flavors of the food do all the talking.

Depending on what you prefer, you’ll either be a gas or wood sort of person or if you’re like us, you might prefer to sit on the fence and enjoy the best of both worlds.

Napoleon’s Rogue range are propane-fueled grills that keep the cook clean and simple and rely on the skill of the chef working the heat and doing all the cooking rather than leaning on the machine and choice of fuel to add flavor, which is the smokers and pellet grill way of doing things.

The Rogue is available in three different models, the 325, the 425, and the 525, so we decided the best way to ascertain what the Rogue was, and is, capable of doing was by heading straight down the middle and spending some time at the grill face with the 425.

The Rogue (we’re old fashioned and tend to prefer using names instead of numbers, it just feels more polite) uses a three burner, propane-powered heating system to deliver heat to its grill surface, which is easy to fire up and use.

Napoleon hasn’t tried to drown the Rogue in overly complex mechanics, and once you’ve attached a propane tank (which incidentally sits in a purpose-built housing ring), you just hit the button on the Jetfire ignition system and all three burners will spring into life.

The dial it up and dial down temperature knobs allow you to control the heat levels of each burner, which makes this grill surprisingly versatile, and the heat differentials you can create, with a little practice, on the grilling surface, will open up a world of cooking and grilling possibilities.

While we didn’t attempt to open our culinary lexicon to anywhere near its full extent, we did cook up a couple of steaks and some burgers with the Rogue and the sear that we managed to achieve thanks to the Rogue’s patterned grilling plates was absolutely sublime.

When the wire rack shelf that comes with this grill is mounted, the total cooking surface is just over five hundred square inches, which is more than enough room to cater to the largest family gathering.

Even though we didn’t break out the measuring tape to compare Napoleon’s figure with how much actual space there is on the combined grilling surfaces, it sounded right to us.

And even if it wasn’t, the fact that they actually throw in a portable range burner that you can attach to the side of the Rogue might account for a portion of these figures.

But even if it does, it’s no big deal as the range burner adds an extra dimension to the fun that you’ll have grilling with the Rogue.

Actually, the installation and connection of the range burner is the only time when you might have to employ a little engineering know-how, as it involved removing one of the foldable side trays and positioning the burner where the tray used to be.

While we’re still on the subject of the three, incredible burners which dispense nearly forty thousand BTU’s of cooking power (and for those of you who don’t know what a BTU is, it’s a British Thermal Unit) between them, also utilize a crossover lighting system, so if a burner goes out, one of the others will relight it.

It sounds like a small thing, but when you’re grilling, it’s the small things that keep heat flowing and ensure a constant, and consistent, temperature when you need it that makes all the difference.

Napoleon hasn’t just made their grill easy to use, it’s also been set up to be practical and simple to clean when the messy business of grilling is done.

The grill housing has a smudge-proof surface, which feels like something out of an old science fiction movie, and the grill plates and cooking shelf are straightforward enough to remove and wipe clean.

The Rogue even has interior storage space and hooks to hang your grilling tools on and doesn’t waste a single millimeter of space.

Every available inch of this impressive grill has been designed and engineered to be practical and functional.  And best of all? It even comes with a limited fifteen-year warranty. Fifteen years. That’s a lot of worry-free grilling.

As much as we’re steeped in tradition and were raised to believe that wood is best and any other form of grilling is heresy and an affront to the gods of the barbecue, we’ve slowly been getting used, and coming around, to the idea that the future of grilling might lie with propane.

And the Rogue 425 helped to reinforce that belief.

Is it a flawless grill?  No, but it’s an extremely solid one that’s offered at a fair price.  For those looking to up their grilling game, the Napoleon Rouge 425 is an excellent contender.

All things considered, if you’re looking for a gas grill and don’t want to break the bank like you’d have to on other Napoleon grills, the Rogue series is a great one to go with.