So you’ve acquired a pellet smoker and it’s time to fire it up to smoke the crown jewel of BBQ – beef brisket.

Maybe it’s your first pellet smoker brisket or maybe you’re just brushing up on your recipe – either way, you’ve come to the right place and we’ve got you covered.

As one of the most versatile and easy to use types of outdoor cookers on the market, pellet grills are perfect for brisket.  All it takes is a little bit of know how and you’ll be well on your way to a spectacular plate beef brisket BBQ.

The brisket comes from a heavily used muscle in the breast area of a cow – and there are two per cow.  The muscle is worked quite a bit and carries a heavy load throughout the animal’s lifetime, which is why it’s naturally so lean and tough.

That’s exactly why brisket has to be cooked low and slow on a smoker – it takes quite a bit of time for the fats, collagens, and other connective tissue to break down and eventually produce the ever so tender and tasty BBQ brisket we all love.

Anatomy Of A Brisket

A whole brisket, also known as a packer brisket, can actually be broken down further into two main parts – the point and the flat.

Later on we’re going to be discussing how to cook a full packer brisket on a pellet grill, but it’s important to know the difference between the point and the flat for a few reasons that we’ll touch on in a moment.  Plus, at many grocers and butchers it’s quite possible to buy just the point or the flat – so you could smoke about half of a brisket on your pellet smoker too!

The brisket point is typically the thicker side of the brisket, and is much fattier than the flat.  Fat typically equals flavor, so the point of a brisket is known for providing some of the ultimate flavor packed bites of BBQ – it’s the part of choice for delicacies like brisket burnt ends.

The brisket flat is typically thinner, and as the name suggests, it lays flat and is much leaner, featuring much less marbling than the point.  However, there is typically a fat cap on one side of the point, which is a thin layer of fat that helps to moisten and flavor this side of the meat while it cooks.

Prepping Your Brisket For the Pellet Smoker

Unless you bought your brisket pre trimmed – you’ll need to grab a cutting board and a sharp knife.  From there, the idea is to carve hard chunks of fat out of the brisket and make passes at the fat cap until it’s uniformly about 1/4 inches thick across one side of the brisket.

If you’ve never trimmed a brisket before, don’t be intimidated – we’ve created a resource specifically to guide you through the brisket trimming process.  Head on over here to see what you need to do to trim your brisket.

Once your pellet smoker brisket is properly trimmed, it’s time to season it with a rub.

The brisket rub is important for a couple of reasons: first, the spices in your rub affect the flavor profile of your end results, so you can really start to customize your cook with the rub!

Second, the spices you choose (and specifically salt and pepper) will influence and flavor the BBQ bark formation on the outside of your brisket.

Personally, I like to keep things simple with my brisket rubs and opt for a traditional Texas style rub:

But you definitely don’t have to stop there – it’s not uncommon to see the following additional ingredients coating the outside of a brisket:

The rub you choose ultimately comes down to your personal preferences – but you definitely need to rub your brisket with something (at a minimum salt and pepper)!

The most important piece of equipment you’ll need (other than your pellet grill) is a probe meat thermometer.  It’s extremely important to know the internal temperature of your brisket – that’s the only way you can know when your meat is finished and ready to come off of the pellet smoker!

Ideally, you can probe a brisket in two places since it’s such a large cut of meat, but just one will also do the trick!

Many of the best pellet smokers on the market nowadays have built-in probe thermometers, but if yours doesn’t have that feature you’ll definitely need to pick up a probe meat thermometer (even something simple like the ThermoPro TP-16).

Once your trimmed brisket has its rub, let it rest at room temperature for a little bit (ideally at least an hour).  Then it’s time to get the meat on your pellet smoker.  Preheat your pellet smoker to 250ºF and set your smoke setting to high.

Once your pellet grill is up to temperature, it’s time to put the brisket on.  Simply place your brisket on the grate and shut the lid.  Then it’s time to kick back and relax for a little bit, because it’s going to take a while for the brisket to cook.

This is one of the best parts about using a pellet smoker for brisket – pellet smokers are basically set it and forget it cookers.  You don’t have to worry about managing a fire – all you need to do is check in occasionally on the temperature of your brisket.

A general rule of thumb is to plan for 45 to 60 minutes of cooking per pound of brisket at 250ºF – but really we are cooking to an internal temperature of around 200-203ºF.

Note that your brisket will stall out about midway through the cook – don’t panic when this happens!  The brisket stall is a phenomenon where your brisket will “stall” out at around 165ºF internal temperature a few hours in to the cook.

You don’t need to crank up the temperature when this happens – eventually your beef will move past the stall and continue to climb internal temperatures.

To Wrap or Not To Wrap

Whether or not to wrap your brisket is another personal preference call – but there are three options: you can smoke your brisket bare, wrap it in butcher paper, or wrap it in aluminum foil, or some combination of these options.

Smoking your brisket bare will lead to the strongest smokey flavor and crunchiest bark, but you run the risk of over doing it and ending up with a dried out brisket.

Aluminum foil on the other hand will lead to the most tender brisket.  But again, it’s possible to over do it on the moisture as the foil wrap essentially creates a steamer like effect – plus it blocks out most of the smoke flavor from your pellets.

Butcher paper is a middle ground – the paper will retain some of the moisture and drippings from the brisket, but some smoke will still make it through the paper to flavor your beef and help with bark development.

I love to make sure there’s a good crunchy bark around my brisket, so I typically smoke my brisket bare for the first 6 or so hours of the cook.  Then I wrap it with butcher paper for the remainder.  When it’s done right, this leads to an excellent bark and very tender insides! 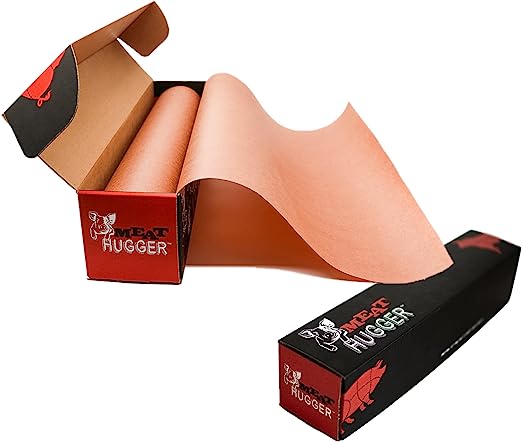 Taking the Brisket Off

After your brisket reaches an internal temperature of 203ºF at the thickest point of the beef, it’s ready to come off of the pellet grill.  From there, you’ll want to put the brisket in an empty cooler to rest for about an hour.

After the brisket has rested in the cooler for about an hour, it’s time to slice your brisket, serve, and enjoy with your favorite BBQ sides!  You’ll want to slice your brisket against the grain for maximum tenderness.  The grain of the point and the flat go in different directions, so it’s best to slice the sections one at a time.

How Long to Smoke a Brisket On a Pellet Smoker?

The general rule of thumb is to plan on 45 to 60 minutes of cooking on the pellet smoker per pound of brisket at 250ºF.  However, that estimate can change depending on the size of your brisket and how hot you run your pellet smoker.

At the end of the day, the important thing is for your brisket to be cooked until it reaches an internal temperature of at least 200ºF.

Which Types of Pellets Are Best For Brisket?

With many foods, you can make just about any type of pellets work on your smoker.  However, since brisket is such a beefy and tough cut of meat, we’d recommend sticking to stronger flavored pellets for smoking brisket.  Our favorites are oak, and hickory or mesquite.

At the end of the day, pellet smokers are an excellent choice of cooker for brisket.  The flavor profile of a pellet smoker brisket will be slightly different than a brisket cooked on a traditional offset smoker or a charcoal smoker, no doubt.

However, you can definitely achieve excellent, tasty results on a pellet smoker.  And when you consider how easy pellet smokers are to operate, it seems like a no brainer to fire one up for a brisket dinner!